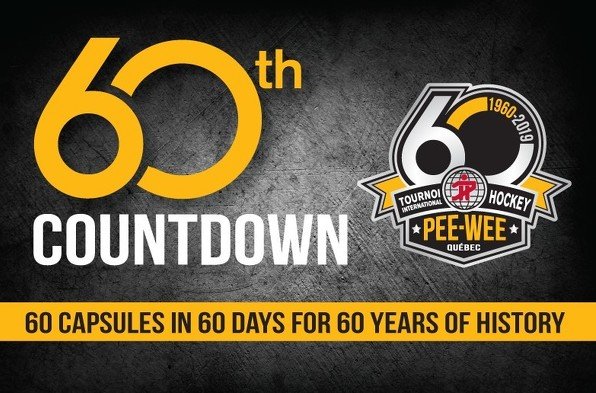 Quebec City, December 14th, 2018 - What do Martin St-Louis, David Desharnais, Marian Hossa and Paul Coffey have in common? They are part of the 1275 NHL players who participated in the Quebec International Pee-Wee Hockey Tournament during their career. They are part of those who remember and will always remember this incredible adventure but especially, the 60 hockey personalities involved in our project: 60th anniversary countdown !!!

A memorable count for the 60th

The Quebec International Pee-Wee Hockey Tournament will be held from February 13 to 24 at the Videotron Center. To honor its 60-year history, the organization has worked hard to roll out a colorful promotional campaign involving sixty hockey personalities. Tomorrow, Saturday December 15, and for the next 60 days, a special video will be posted on the Facebook page and on the tournament website. Hockey’s big names will speak to the general public and to the participants. Some will talk about a beautiful memory of their visit in Quebec, others will invite people to join the festivities or simply encourage young pee-wees.

"We are more than grateful to have received so many positive responses from these hockey stars. It's an honor for us to see them supporting our event" said Patrick Dom, General Manager of the Quebec International Pee-Wee Hockey Tournament.

The vast majority of players who were approached for the project played in the tournament when they were young. They were happy to encourage the next generation or share their beautiful memories. To see the complete list of the 1275 players or ex NHL players who participated in the TIHPWQ, visit our website: https://www.tournoipee-wee.qc.ca/en/page/players_pro.html

Links to view the upcoming capsules: